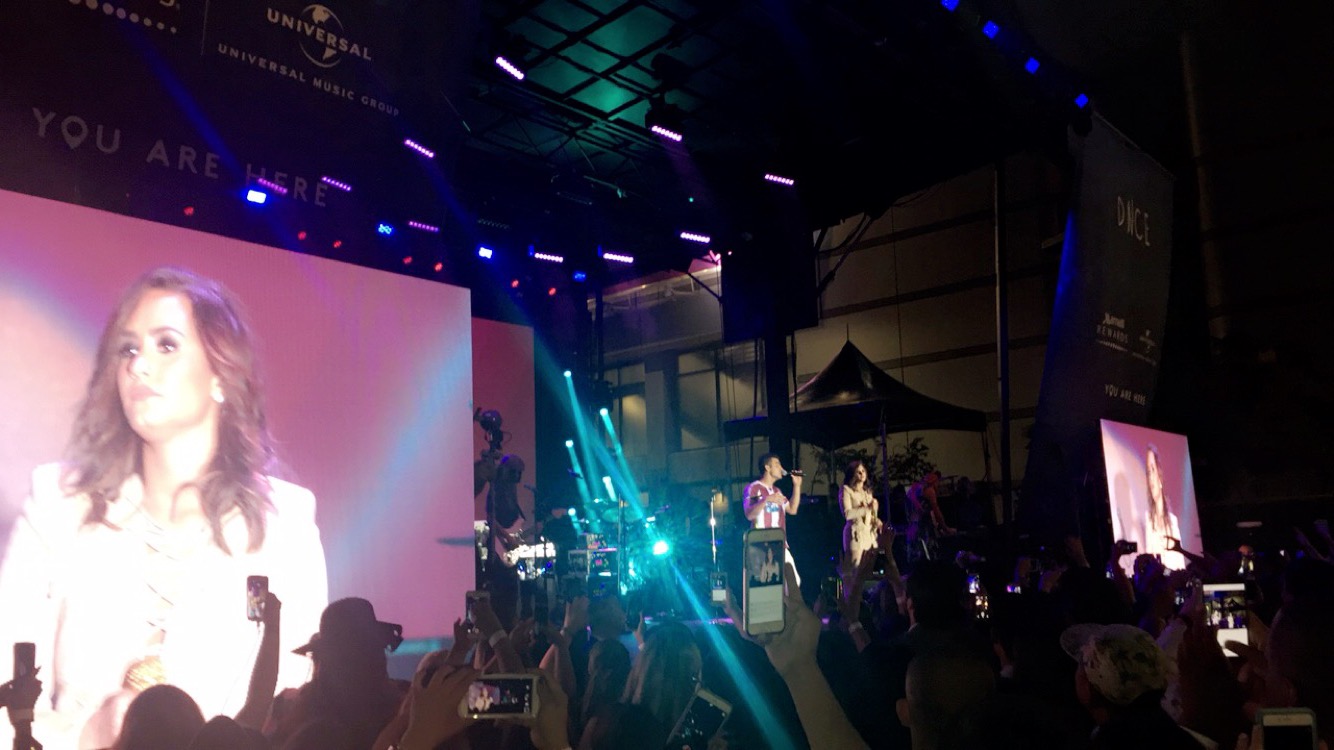 A few weeks ago, my colleagues and I were invited to an event that was taking place at the L.A Live. For those of you who don’t know, the L.A Live is an area in Downtown Los Angeles where the Staples Center, Microsoft Theater and Nokia Plaza are all situated. There are restaurants and nightclubs and quite honestly, it’s one of my favorite areas in all of LA.

Anyways, I took the subway and walked to the L.A Live area where I saw a sign that said Marriott Hotel Rewards : DNCE & Demi Lovato with an arrow pointing to the left. I had no idea what was going on, I didn’t know that two of my favorite artists were performing in that area that night. I started walking around as I was waiting for my event to begin, and I noticed a stage behind a tall fence. That’s when I put two and two together : the performance was going to be taking place outside, but only individuals with the Marriott rewards card were able to apply for tickets and actually get into the show. At that point, I thought to myself “perfect. I’ll be able to hear them sing.“And, I felt better knowing that even if I would have known about the event beforehand, I wouldn’t have been able to get in seeing as how I don’t have the rewards card.

So, okay, I went to the event I was invited to with my colleagues. We hung out, and then two of them had to leave so I asked them if they could let me know if they could hear anyone singing as they walked outside. A few minutes later, I got a text saying that they could very clearly hear DNCE perform Cake by the Ocean, so I went outside by the stage, behind that big fence, and just listened to the group perform. Amazing. Demi Lovato was coming on next and I was more than content just hearing her voice…

“Excuse me, would you like to actually see the show?” I turned around to find a Marriott employee standing right in back of me, asking the question. “If you turn the corner, you can get in for free. We have extra tickets that we’re giving out.” I quickly made my way to the other side of the gate, was given a wristband and voilà, I WAS IN! I was at the back of the crowd, and before I even had time to take a quick Snapchat, I had security taping me on my shoulder… “would you like to get a closer view?” he asked. Now, you can guess what my answer was. “Follow me,” he said. I followed Mr. Security Guard right up to the front, where I was able to enjoy Demi Lovato’s incredible voice and performance for 45 minutes. DNCE even came out to sing a duet of their hit single Toothbrush.

It was incredible, and probably one of the most memorable nights of my life, simply because it was so unexpected. I left my apartment that night thinking I was going to an event that I was invited to, and I went home having seen two of my favorite acts perform live. Nowhere but in Los Angeles would this happen, n o w h e r e.