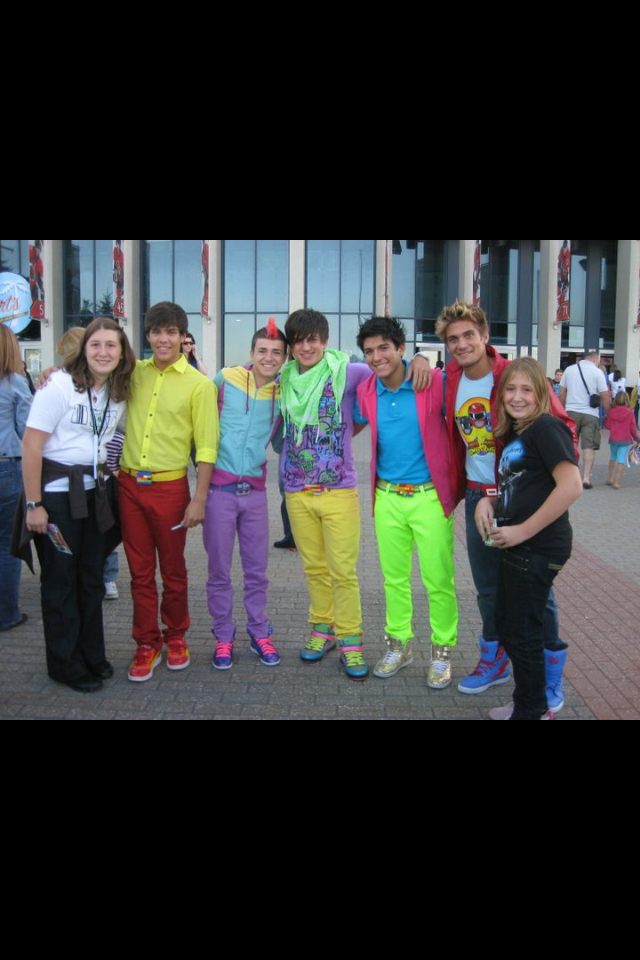 Seeing as how the 2016 Personal Project Fair was held at my high school last week, I figured now would be an appropriate time to let you all in on my story…HOW I got involved in the music industry 🎶✨…

I truly believe that in life, certain pivotal moments will occur, moments that will change everything forever. One of those moments happened for me on August 31st 2009…the day I met WOW. I was headed to my second Jonas Brothers concert in three days, in Ottawa, and as I was excitedly heading into the venue, I passed by a group of five guys, sporting neon clothing. I had noooo idea who they were, and quite frankly, neither did I care. I was 12 at the time and my only concern was getting into the venue & getting to my seat for the concert. THANKFULLY, my mom stopped me and said..”Giuliana, you better go meet those guys. You never know, one day, they might be famous.” So, I listened to my mom…thanks Ma!!!

Over the course of the next year and a half, I became crazily obsessed with this boyband and travelled to several places to see them. It was cool, as they were a band that was just starting off, so I got to know them and would have conversations with every member whenever I would see them – I even got them all to come to my high school one day!

Now let’s fast forward a year. August 2010 – I got word that WOW split up and I nearly lost it. I couldn’t believe what was happening, but truly, this was the biggest blessing in disguise for me. Had WOW still been together today, I don’t think things would have turned out the way they did…

Come September 2010, Frankie announced that he was going to be commencing his career as a solo pop artist. I loved all of the members of the group but c’mon, it’s inevitable that I had my favorite member 🙈…I’m sure you can all guess who it was! 😜

From the time Frankie started his solo career, I knew I wanted to help him. And I had one goal in mind: for him to no longer just see me as a 13 year old fan, but see me as someone who could seriously help him on his journey to stardom.

I believed in Frankie with the entirety of my heart from the very first day, and six years later, I believe in him just as much.

So there I began, on my journey to proving myself & making sh*t happen hahahah. I started tweeting anyone who I thought had any connections in the music industry whether it be a producer, a manager, an agent, a reality star, a reality star’s parents, siblings, friends, aunts, uncles. You name the person & I’ve probably already tweeted them one of Frankie’s videos hahahah.

I spent countless hours and days, sunny & rainy, to try and get results. And oh results did I get. From using Twitter to my advantage, I got Frankie noticed by top music industry related individuals & got him several online interviews, featured on the front page of RyanSeacrest.com (not once, but twice) & even got him interviews in magazines.

Was it easy? Definitely not. Was it time consuming? Heck yes! Discouraging at times?! Words can’t describe. But was it worth it? Absolutely. There was no feeling more satisfying than that of being able to tell Frankie “hey, I got you an interview with x person” or “OMG! Rodney Jerkins just watched your video.” Every “no”, or every ignored message, made those “yeses” and positive responses that much more worth it.

Now, let’s fast forward a little bit more. The 2012-2013 school year. Where I went to high school, I was in the International Baccaleaureate Organization, which meant that in our senior year (Grade 11), we had to work on a year long “Personal Project”. Still trying to help out Frankie, I figured that if I had to dedicate so much of my time to something, I would love to tie it in with what I was doing for him. That being said, I made the goal of my project “to see if having a career in the music industry is something I would seriously like to pursue” and did this by taking on the titles of booking agent, concert promoter, and PR agent, for Frankie.

Throughout the year, I worked day in and day out to help make this project a success – I got Frankie to perform at my school variety show, which turned into him later coming back to do his own show, I organized a promo tour for him, got him a few TV interviews and even landed myself on the Global Montreal Morning News Show.

It is through the duration of this project that I proved myself & showed that I was more than just a “fan”, that when I believe in someone, I believe in them till the very end, and that when I do something, I give everything I have towards it.

Over the last three years, I have taken my project outside of school & have continued on the same path. Frankie is still the only artist in my sight, I have solidified my passion, have met some of the biggest power players in the music industry & have truly experienced the most incredible things.

So there we go – now you have it! I hope my story inspires even just one of you to believe that you can do anything you put your mind to. Trust me, all of that hard work is so so worth it in the end! ❤️

I might have made my personal goal a reality, but this story ain’t over until I see Frankie’s name in flashing lights at Madison Square Garden…I ain’t ever giving up on you bro, you’re stuck with me for life 😜

2 thoughts on “How it All Started…”